What do progressives 'think' about Palin?

Posted by Resist Tyranny at 1:26 PM No comments:

Despite the clear language of our First Amendment, religious liberty is under increasing attack in the United States. Our Founders realized an important omission, and ratified what became known as the Bill of Rights on December 15, 1791. The first of those ten amendments reads:


Congress shall make no law respecting an establishment of religion, or prohibiting the free exercise thereof; or abridging the freedom of speech, or of the press; or the right of the people peaceably to assemble, and to petition the Government for a redress of grievances. (emphasis added)

A San Juan Capistrano, California, couple has been ordered to stop holding a Bible study in their home on the grounds that they are violating a city ordinance. Overly-nosey city officials claim the home Bible study is a "church" and that it cannot be considered a private gathering:

Homeowners Chuck and Stephanie Fromm have already been fined for holding what city officials called "a regular gathering of more than three people." These clueless bureaucrats claim homeowners need their permission to hold a Bible study in their home. The Capistrano Dispatch explains:

According to city records, a code-enforcement officer gave the Fromms a verbal warning about the meetings in May. Citations were issued in May and June, according to city records. San Juan Capistrano City Attorney Omar Sandoval said the city had not yet been served with a copy of the legal action, so he could not comment.

The Fromms' citations say they violated section 9-3.301 of the Capistrano Municipal Code, which prohibits "religious, fraternal or non-profit" organizations in residential neighborhoods without a conditional-use permit. The footnote on the section says it "Includes churches, temples, synagogues, monasteries, religious retreats, and other places of religious worship and other fraternal and community service organizations."

This seems to be all about extorting money from city residents, because a "conditional use permit" costs money, and residents must pay the city to get one. The Fromms reportedly face additional fines of $500 per meeting for any further “religious gatherings” in their home.

Clearly, local ordinances that have the effect of prohibiting the free exercise of religious expression in such a private manner stand in stark opposition to our Constitution, and must be changed.

President Barack Hussein Obama, ever the obnoxious, inexperienced oaf, is pictured here with actual world leaders. He is waving, as though he is completely oblivious to anyone else posing for the photo. The original image is posted here.

So let's have a little fun. What would your caption be for this photo? Leave your comments below. 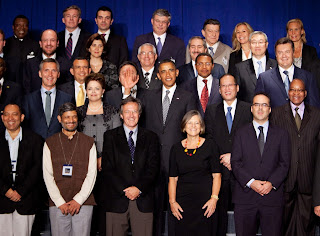 Posted by Resist Tyranny at 11:27 PM No comments:

What kind of government encourage citizens to "report" things - spoken comments, writings, activities that may be in opposition to the ruler? That's a time-tested tool commonly used by dictators and oppressive, evil regimes. So in 2011, who creates a gigantic database full of tweets and blog posts, purely because they don't like the content? Communist China? Cuba? Putin's Russia? No, think again. 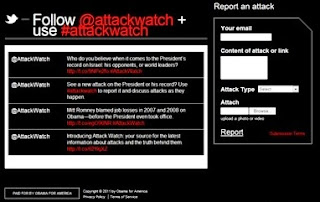 During Adolf Hitler's rule in WWII-era Germany, members of the Hitler Youth were encouraged to report any "unpatriotic" comments or activity they saw or heard from others, including their own parents.

Barack Hussein Obama's not-so-brilliant re-election effort is being led by people who embrace these National Socialist tactics: If someone says or publishes anything critical of the President, we are encouraged to "report them." Organizing for America, AKA Obama for America, has just debuted a web site that encourages and facilitates one citizen snooping on another. AttackWatch.com is a portal into pure facism.

Sound a little Orwellian? It certainly isn't American. These people clearly believe they should have total control over what you do, say, and think.

It wasn't long ago when Obama's minions were encouraging Americans to report "fishy" ideas, speech, and activity directly to a White House email account, flag@whitehouse.gov. It disappeared almost as soon as it became general public knowledge that Obama was attempting to collect such information. We hope this cynical, free-speech-squelching, idiotic idea dies a quick death, too.

But it tells you a lot about who these people are, doesn't it? Every moment that Obama and his liberty-hating crew are in power increases the danger to our Republic.
Posted by Resist Tyranny at 10:12 PM 8 comments:

Obama marks September 11 with a speech 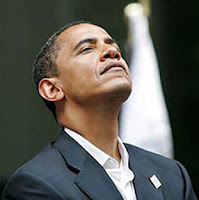 President Barack Hussein Obama marked the tenth anniversary of the September 11 terror attacks with a speech at the Kennedy Center in Washington, DC.

In it, he quoted the Bible several times. But since Obama is the most radically pro-abortion President in US history, it's difficult to believe that he thinks highly of the Bible as a whole. I addition, he listened to "Black Liberation Theology" messages at his church in Chicago for 20 years, which have precious little to do with Christian scriptures, and everything to do with Marxism.

His message, delivered 10 years after al Qaeda flew hijacked airplanes into the World Trade Center towers, the Pentagon, and into a Pennsylvania field, gives no hint of America's resolve to eradicate jihad Islam. Could that be because Obama himself holds no such commitment?

The White House provided the full text of Obama's remarks:

Posted by Resist Tyranny at 10:21 PM No comments:

President Barack Hussein Obama cajoled Congress into assembling for a joint session on September 8, and then subjected them to a campaign lecture.

Desperate to have Americans think he can something about the stagnant US economy, Obama and his minions pretended that he worked on an actual plan to create jobs during his swanky Martha's Vineyard vacation. But sane people know that government doesn't create any jobs - it just spends money. Money that Obama eagerly borrows from communist China.

During his stump speech, he pointed his finger repeatedly at members of Congress, and insisted that they pass his "jobs bill" immediately:

Only trouble is, no such jobs bill exists.

Ever the lazy community organizer, Obama did the same thing with ObamaCare and the recent so-called debt ceiling crisis, berating Congress to pass legislation, but leaving them with the bothersome task of writing it. An important clarification: Congressional staffers, lobbyists, and convicted felons actually authored the ObamaCare language, and Congressional Democrats passed the bill without ever bothering to read it.

How aware are you?

How did you do? Although the video clip aims to educate the motoring public about sharing the road with two-wheeled vehicles, there may be a bigger lesson here.

Washington politicians are adept at distraction. Let's commit to watch their other hands, and keep them honest. Well, that might be impossible. But let's at least agree to expose what their other hands are doing. Because it's too often deceptive, corrupt, and anti-liberty.
Posted by Resist Tyranny at 12:32 AM 1 comment:

Email ThisBlogThis!Share to TwitterShare to FacebookShare to Pinterest
Labels: awareness 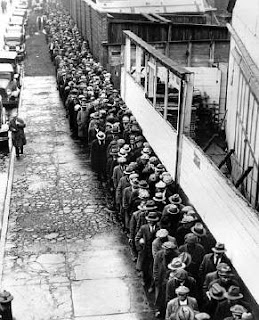 Desperate to remain in power despite plummeting poll numbers and a weak economy, President Obama has decided to take swift, bold action. That's correct: He will give yet another speech.

The Obama Regime issued their talking points in advance of the speech, which will be cut short to avoid offending Green Bay Packers and New Orleans Saints fans. The talking points, and a plain English translation:

According to Obama and his job-destroying, violence-inciting minions, The so-called "American Jobs Act":
Hack politician talking points - regardless of the source - are nothing more than a disgustingly-transparent attempt at spin. Americans are sick and tired of sound-bite speak.

As for us, we'll be watching the game, not the President's latest campaign speech.
Posted by Resist Tyranny at 4:15 PM No comments:

Maybe George Orwell had it all correct in 1984. He just got the year wrong:

A Future of Body Chipping?
Some government programs and cities are making this RFID “chipping” mandatory. And it’s now becoming more acceptable to use biometrics and RFIDs on people.

Supporters say this chipping could help track lost or kidnapped children, or Alzheimer's patients who wander off. But they can also be used to control a person’s actions.

One Florida school is requiring students to have their biometrics checked before they get food from the cafeteria. And a Miami university hospital has embedded microchips to track whether medical workers are washing their hands.

This chipping may seem strange now, but Ostrolenk suggested it'll become commonplace as it spreads.

“So the next generation arises and says, 'Well, that's kind of normal. Of course you need a device to keep track of you to make sure you don't get kidnapped or lost or into trouble,’” he said.

How about you? Are you willing to have an RFID chip implanted under your skin when someone tells you it's for your own good?
Posted by Resist Tyranny at 9:35 PM 3 comments: