How much is Obama spending on his India trip? 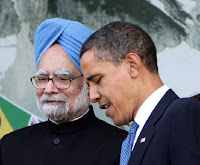 The White House remains tight-lipped, saying only that most of Obama's staff will accompany him, as will the First Lady and their two children. A recent official blog post claims these reports are "wildy inflated."
Security for a trip to a known terrorist haven is understandably expensive. We'd be the first to agree that no details of Presidential security should be made public, and one of the last to complain about the cost of such arrangements.
The real question is whether or not the President truly needs to be present personally for what appears to be a massive "junket" at best, or, at worst, an Obama family vacation with a few business-related trappings tacked onto an otherwise touristy itinerary.
Whether the actual cost is $200 million a day or only $1 million for the entire trip, American citizens have a right to know how their money is being spent, and why. The White House can, and should, tell us how much this trip costs.
In an economy when nearly one in ten US citizens is unemployed and home foreclosures are displacing thousands, frugality with our tax dollars would seem a prudent trait for the President to adopt. With his continuing profilgate spending, President Obama gives the strong impression that he doesn't really care about any of this.
Posted by Resist Tyranny at 9:12 AM 3 comments: