Rep. Anthony Weiner is on the run

Rep. Anthony Weiner (D-NY) tried - rather unsuccessfully - to duck and weave away from his lewd photo posting before members of the media today. Fortunately, CNN's Dana Bash, Ted Barrett, and others relentlessly pursued answers from the Congressman, who steadfastly refused to answer any of the very relevant and reasonable questions put to him:

Has the countdown to Weiner's resignation begun?
Posted by Resist Tyranny at 7:56 PM 2 comments:

The US Senate voted Wednesday to reject a proposed Federal budget for fiscal year 2011, and five Republicans proved they don't care about fiscal responsibility.
﻿﻿﻿﻿
The five RINOs (Republicans In Name Only) who seem unconcerned with a $14.5 trillion national debt and $1.5 trillion annual deficit are Susan Collins and Olympia Snowe of Maine, Scott Brown of Massachusetts, Lisa Murkowski of Alaska, and Rand Paul of Kentucky, who all voted against the so-called Ryan plan. Paul claimed he voted "no" because the proposed budget cuts weren't deep enough.
Three senators not voting were Republicans Kay Bailey Hutchison of Texas and Pat Roberts of Kansas, along with Democrat Chuck Schumer of New York.
﻿﻿﻿﻿
Note: Both Snowe and Brown are up for re-election in 2012.
﻿﻿﻿﻿
The budget proposal, authored by Rep. Paul Ryan (R-WI), failed in the Senate, 40-57. A simple majority - 51 votes - would have moved the plan forward.
The Senate also voted on President Barack Obama's proposed budget. The Spender in Chief's budget failed to garner even a single democrat vote, and was defeated 0-97.
Posted by Resist Tyranny at 7:37 PM 1 comment:

Another of the fine on-air personalities at MSNBC, Ed Schultz provides more evidence for us that "progressives" are ignorant, rude, godless, profane, reprehensible human beings:

MSNBC has suspended Schultz for his remarks, because even they can't keep someone on the air who says things like this. Not fired - suspended.

Does Obama EVER stop talking?

Once again, our Community Organizer in Chief proves that his main "talent" seems to be talking. Or maybe talking too much.

When toasting Her Majesty, Queen Elizabeth, protocol states that Obama should pause when he says "the Queen" to wait for the playing of "God Save the Queen." But Obama either didn't know that, or didn't care.

You have to appreciate the Mussolini face he makes toward the end of the clip, realizing he's just committed a big-time breach of royal etiquette. At least he didn't use the personal pronoun "I" or make an iPod joke to cover the awkward moment.
Posted by Resist Tyranny at 10:17 PM No comments: 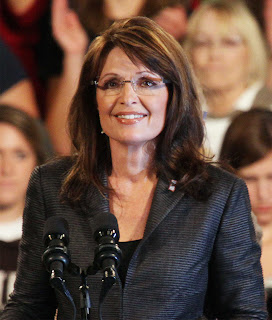 If Palin does decide to run for President, "The Undefeated" will likely play an important role in positioning her early campaign efforts.

"This film is a call to action for a campaign like 1976: Reagan vs. the establishment," says producer Stephen K. Bannon.

Bannon managed to keep the film secret until now. "We shot on the weekends, and we shot in locations that weren't being used during those weekends," Bannon said. "I did it with a handpicked crew of people I know and trust, and we were able to stay under the radar. The planning for the secrecy of this took many, many weeks."

The film is scheduled to premiere in Iowa next month before debuting in New Hampshire, South Carolina, and Nevada. After screenings in these early voting states, Bannon plans to release it in 50-100 markets across the US.

Scott Conroy has posted an excellent piece on this with all the details at RealClearPolitics.com. You can follow Bannon on Twitter.
Posted by Resist Tyranny at 9:26 PM 1 comment:

The city of Joplin, Missouri was hard hit by a massive funnel cloud at about 6:00pm local time on Sunday, May 22. The tornado destroyed major parts of the city, and more than 100 people are reported dead so far. City officials are posting important updates regularly here.

According to many reports, this was one of the deadliest tornado strikes in half a century. Some brave storm chasers managed to get this glimpse of the killer storm on video:

Samaritan's Purse is just one of many reputable organizations that will accept your generous contributions for disaster relief. Let's rally to help our fellow citizens!
Posted by Resist Tyranny at 8:43 PM No comments:

What do you think? Is Cain a serious candidate for the Republican nomination?
Posted by Resist Tyranny at 11:30 PM 3 comments:

Two very different Presidents, in their own words

The success of yesterday's mission is a tribute to our men and women now serving in Iraq. The operation was based on the superb work of intelligence analysts who found the dictator's footprints in a vast country. The operation was carried out with skill and precision by a brave fighting force. Our servicemen and women and our coalition allies have faced many dangers in the hunt for members of the fallen regime, and in their effort to bring hope and freedom to the Iraqi people. Their work continues, and so do the risks. Today, on behalf of the nation, I thank the members of our Armed Forces and I congratulate 'em.


And so shortly after taking office, I directed Leon Panetta, the director of the CIA, to make the killing or capture of bin Laden the top priority of our war against al Qaeda, even as we continued our broader efforts to disrupt, dismantle, and defeat his network.

Then, last August, after years of painstaking work by our intelligence community, I was briefed on a possible lead to bin Laden. It was far from certain, and it took many months to run this thread to ground. I met repeatedly with my national security team as we developed more information about the possibility that we had located bin Laden hiding within a compound deep inside of Pakistan. And finally, last week, I determined that we had enough intelligence to take action, and I authorized an operation to get Osama bin Laden and bring him to justice. Today, at my direction, the United States launched a targeted operation against that compound in Abbottabad, Pakistan.

Most amazing NFL skills ever

This is another incredible example of how you can't believe everything you see. As former residents of Green Bay, Wisconsin, our personal favorite is Mason Crosby kicking the ball to ring the Brown County Courthouse bell.

It's nice to think these National Football League players are really this talented. But the real talent lies with the digital video technicians:

The consistent ability of progressive judges to rule in favor of tyranny, and against the plain meaning of the United States Constitution, is becoming increasingly worrisome.

Issuing a 3-2 decision in Richard L. Barnes v. State of Indiana, the Indiana Supreme Court has pronounced that citizens of Indiana have no right to resist illegal police entry into their home.

Justice Steven David writes in the majority opinion: "We believe... a right to resist an unlawful police entry into a home is against public policy and is incompatible with modern Fourth Amendment jurisprudence. We also find that allowing resistance unnecessarily escalates the level of violence and therefore the risk of injuries to all parties involved without preventing the arrest." (emphasis added)

Well, perhaps police should make certain they make only legal entries into private homes, so they don't get shot or otherwise injured by an ordinary citizen who is legally defending his family and personal property.

Apparently David and the two other Constitutionally-illiterate justices believe precedent, their own opinions, and the latest law school graduate's white papers are more important than the Constitution itself.

Ironically, this is exactly what the Founders aimed to prevent when they wrote the Fourth Amendment (part of the Bill of Rights). It reads:


Amendment 4 - Search and Seizure. The right of the people to be secure in their persons, houses, papers, and effects, against unreasonable searches and seizures, shall not be violated, and no Warrants shall issue, but upon probable cause, supported by Oath or affirmation, and particularly describing the place to be searched, and the persons or things to be seized.

Note the absence of any "violence prevention" thinking? In other words, the Indiana court's decision is plainly unconstitutional.

﻿
﻿ A nwitimes article gets the implications of this ill-informed decision exactly right: "Overturning a common law dating back to the English Magna Carta of 1215, the Indiana Supreme Court ruled Thursday that Hoosiers have no right to resist unlawful police entry into their homes." FreedomsPhoenix.com has more analysis in this post, Indiana: Full Frontal Facism.

A final, comforting thought: David further opined that a person arrested during unlawful entry by police can be released on bail, and has plenty of opportunities to protest the illegal entry through the court system. So, even though you're minding your own business and the police have no legal right to enter your home, David isn't troubled by your unlawful arrest or imprisonment, either.

That is "modern Fourth Amendment jurisprudence," and it has no place in our Constitutional Republic.
Posted by Resist Tyranny at 5:33 PM 2 comments:

More from one of the least intelligent, progressive-minded television personalities who opines on MSNBC.

Lawrence O'Donnell attempts to interview former US National Security Advisor and Secretary of State Condoleeza Rice. As is typical of liberals, he pretends to ask questions, but really just drops false, incendiary statements in order to ridicule one of the smartest women on the planet. And to compound his boorish manner, he constantly interrupts Rice.

On balance, it doesn't seem to work very well for him:

Visit msnbc.com for breaking news, world news, and news about the economy
Posted by Resist Tyranny at 12:55 AM 1 comment:

President Obama and his national security team were pictured this week as they focused their intent, collective gaze on something. We were told, in White House Version 1.0, that it was a live feed from Abbotabad, Pakistan, as US Navy SEAL "assaulters" killed Osama bin Laden.

But Central Intelligence Agency chief Leon Panetta now says there is no video of the Osama bin Laden raid. There was supposed to be, but the feed blacked out for 25 minutes, according to Panetta. So when a video and still images surface, as they eventually must, will they be trustworthy?

Seeing is believing, right? Or is it? Watch this clip, and then tell us you'll believe any photographic "evidence."

We are Americans, and we have the government we asked for. Let's all agree to ask for better in 2012, shall we?

We can all recall the feeling, can't we?
The school photographer called you "Tarzan" or "Cinderella" or some other goofy name while you posed for the camera. You laughed, uncomfortably. Eventually, you received a packet of photographs. You opened them eagerly - only to be disappointed that your hair wasn't perfect, or you regretted the clothes you wore that day.
But aren't you glad you never saw anything like this in the packet?

Ace Online Schools has compiled an entertaining collection of 30 truly awful school photos. Pure schadenfreude. The other 29 images can be seen here.

Posted by Resist Tyranny at 6:00 PM No comments:

bin Laden's 'mansion' burns, or something

Pakistan television broadcast this video of Osama bin Laden's mansion hideout on fire, after he was killed by US military forces:

UPDATE: Subsequent, conflicting statements by the Obama Regime have created a murky, almost indiscernable description of exactly what happened in bin Laden's compound. The video above may actually have captured flames that consumed a US military helicopter, which was intentionally destroyed by people Obama officials refer to as "assaulters."
Posted by Resist Tyranny at 2:08 AM No comments:

A picture is still worth a thousand words