Ronald Reagan may well be the best US President ever when it comes to being in front of a television camera. In addition to his natural charisma and considerable public speaking skills, Reagan had a tremendous sense of humor.

Enjoy this famous moment during a 1984 presidential campaign debate with Walter "Fritz" Mondale, as Reagan responds to a questioner who suggests he may be too old to continue as President:

Just how valuable is a McCain endorsement, anyway?

Senator John McCain (R-AZ) recently gave his enthusastic endorsement during a rally for Republican presidential candidate Mitt Romney in Charleston, South Carolina. Unfortunately, McCain's endorsement was in support of someone else:

Posted by Resist Tyranny at 2:22 PM No comments:

Why is Newt so angry?

Republican Presidential candidate Newt Gingrich understands that Barack Hussein Obama must be defeated in 2012. Granted, this is a montage of video. But Newt articulates exactly why informed citizens detest the Obama Regime. Watch as Newt coherently demonstrates comprehension of every issue you can think of - all without a teleprompter:

Posted by Resist Tyranny at 3:06 PM No comments:

Is Obama re-writing the Constitution? 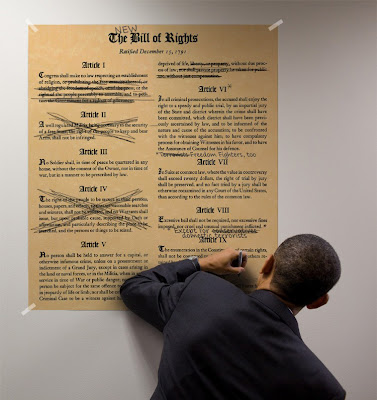 Please, no comments here about how the Bill of Rights is still intact. We acknowledge that it is, on paper.

But in daily life?
Wow, lots of references to arrests there. Could it be that ordinary US citizens are increasingly being treated like criminals when they exercise their Constitutional rights?


A Bill of Rights is what the people are entitled to against every government, and what no just government should refuse, or rest on inference. ~Thomas Jefferson

Jefferson is making a subtle, but tremendously important point. Our rights outlined in the first ten amendments to the US Constitution are not there to protect citizens from bad people. According to Jefferson, they exist to protect us from the Federal government - the very entity now eroding these rights.

Were he with us today, Jefferson might observe that tyranny is raising its ugly head by quietly reducing and eventually eliminating our Constitutional rights that were meant to protect us from an all-powerful, intrusive Federal government. And only we, the informed citizens, can stop tyranny.

Patrick Henry made it even clearer:

Will a $16.4 trillion national debt anger you?

Many informed Americans are outraged that President Obama and Congress have already conspired to add another $1.2 trillion to our national debt, which stood at $15.2 trillion at the beginning of 2012. If this doesn't inspire you to political involvement, perhaps you either don't understand the numbers, or don't understand the long-term consequences of such unsustainable debt.

This video is a great explanation for those of us who are either math-challenged or just not quite up to speed on what our Federal government is doing to us:

And you should definitely read 34 Shocking Facts about US Debt that Should Set America on Fire with Anger (Our thanks to @usactionnews).
Posted by Resist Tyranny at 4:10 PM No comments:

Former Senator Rick Santorum (R-PA), a candidate for the Republican nomination for President, appeared at an event in Washington, Iowa, in November 2011. Santorum explains here in plain English why it's almost impossible to stem the growth of our Federal government or even control spending:

This clip is a continuation of a Q&A session with the audience, and Santorum discusses: