The media steadfastly refuse to tell us who Barack Hussein Obama is. But a man is known by the company he keeps. Your instincts tell you that, based on his policies and behavior, Obama is an enemy of the United States of America and our Constitution.

Here is the confirmation that your instincts are correct. This infographic (click the image to enlarge) explains everything you need to know about President Obama: 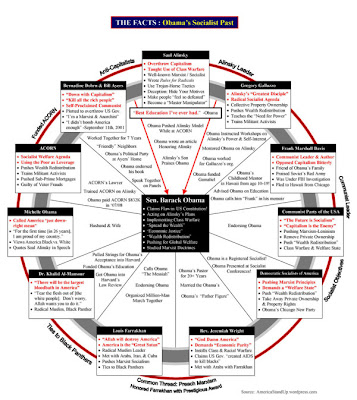 Posted by Resist Tyranny at 11:45 AM No comments:

Why? Well, Obama does have a proclivity for apologizing for just about anything the United States of America accomplishes or does. But he apologized to Karzai because a handful of Korans were disposed of by US troops. Not because the soldiers detest the murderous death cult known as Islam, mind you, but because terrorist prisoners were passing notes to each other, scrawled in the margins of the books.

Karzai demanded that the responsible parties be tried, and Obama promised to punish the troops responsible for such reprehensible behavior. Naturally, the contents of Obama's groveling remains secret, because ordinary citizens cannot possibly understand his brilliant diplomatic dispatches.

Predictably, Muslims rioted in response, and Afghan troops - supposedly our mission partners - shot and killed two American soldiers in the melee. Many Afghans also died in the senseless Muslim violence.

Enjoy this sincere apology to Karzai from a patriotic, concerned American citizen:

Would that we had 300 million more just like her.
Posted by Resist Tyranny at 10:35 AM 6 comments:

Walter E. Williams on the Economics of Liberty

Walter E. Williams makes more sense than most people when it comes to commentary on economics. Williams, John M. Olin Distinguished Professor of Economics at George Mason University, offers insights here such as:


This clip includes excerpts from Williams' speech "The Entrepreneur As American Hero," presented in 2008. But because Williams speaks about timeless principles of economics and human behavior, his remarks are as applicable today as they were when he first presented them.
Posted by Resist Tyranny at 9:14 PM 3 comments:

Many Americans are deeply offended when someone sets fire to an American flag. So much so that a Constitutional Amendment prohibiting flag desecration has been proposed. Perhaps none are more upset by this than military veterans, who have seen their fellow service members die in combat fighting for our freedom and know better than any of us what the Stars and Stripes symbolizes.

Local VFW (Veterans of Foreign Wars) representatives took matters into their own hands recently to punish a man who, after being refused alcohol (because he had no identification), decided to burn the VFW Post's American flag:

This was no ordinary flag, either. It had flown over a foxhole in Iraq, where several U.S. soldiers made the ultimate sacrifice for their country. What do you think? Does the punishment fit the crime?
Posted by Resist Tyranny at 10:13 PM 39 comments:

Palin's remarks kept the crowd jumping to their feet. And it's especially gratifying to watch her rebuke a handful of "occupiers" who disrupt the proceedings at 7:00:

Posted by Resist Tyranny at 10:24 PM No comments:

US Senator Marco Rubio (R-FL) spoke to an enthusiastic audience at the Conservative Political Action Conference in Washington, DC on February 9. Rubio focused his well-received remarks on Barack Hussein Obama and his disastrous record as President.

Would you vote for this man?
Posted by Resist Tyranny at 8:18 PM No comments:

This man has a bright future in American politics:

Posted by Resist Tyranny at 7:51 PM No comments:

If you were a kid in the 1960s or 1970s, you'll enjoy this video trip down memory lane. Isn't it amazing - and fun - that we can find stuff like this online?

Perhaps you saw a commercial or two that you remember. What were your favorite television shows?
Posted by Resist Tyranny at 1:21 AM 2 comments:

This is what it's come to in America under the Obama Regime:

President Obama's Food and Drug Administration warns about the potential adverse effects of so-called "raw milk." Is it legal to sell raw milk? In many cases, according to the FDA, yes. But if you dare sell this terribly dangerous commodity, law enforcement officers may enter your private property, weapons drawn, to enforce these seemingly-obscure Federal regulations.

Obama's heavy-handed, police state tactics are a clear violation of the store owner's private property rights and the Constitutional rights of every employee and patron to be free from unreasonable search and seizure. Most reasonable people would agree that it isn't necessary - or wise - for police to enter a law-abiding, peaceful, place of legal business acting like stormtroopers.

But Obama, who has touted himself as a Constitutional scholar, has never demonstrated much understanding of the document. His respect for the principles it espouses is negligible. And his policies undermine both the US Constitution and Declaration of Independence at every turn.
Posted by Resist Tyranny at 9:04 PM No comments: