Fight to win, or bring them home now 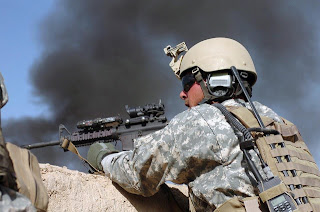 President Barack Hussein Obama was elected a year ago with the nation engaged in a two-front war on terror. The new Commander in Chief promptly nixed the term "war on terror," preferring bizarre euphamisms like "man-caused disaster."

Obama has now announced his determination to get out of Afghanistan, win, lose or draw. Oh, he'll send a few troops in to make it look like a fight. But make no mistake, he wants out.

Obama, ever the callow youth who just isn't up to leading the free world, still does not understand that the Taliban and Al Quaeda must be completely and continually vanquished. Unless we make a long-term commitment to keep the terrrists from doing so, they will continue to attack and kill us. Nor does Obama seem to care that leaving terrorists alive, relocating them to US soil, conferring Consitutional rights that belong only to US citizens upon them, and trying them in civilian courts all add up to more trouble for the US in the future.

The Washington Times recently published some of the new Rules of Engagement (ROE) for Afghanistan, following interviews with US military personnel. Among the assinine, we-don't-care-if-we-win-or-not rules our brave troops must obey:
Osama bin Laden couldn't have crafted a more advantageous list. Our military is the finest in the world. But it will not be possible for any army to win a war against a ruthless, barbaric enemy with such ridiculous restrictions.

Better to bring the troops home now, rather than leave them to die in politically-correct handcuffs.
Posted by Resist Tyranny at 3:47 PM