A tale of two proclamations 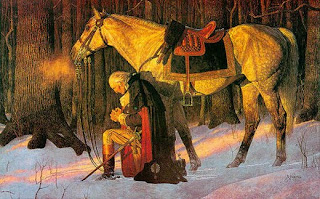 What a contrast. Here's the latest startling clue that tells us Barack Hussein Obama does not understand or follow American traditions.

Presidential Proclamation - Thanksgiving Day
A PROCLAMATION
What began as a harvest celebration between European settlers and indigenous communities nearly four centuries ago has become our cherished tradition of Thanksgiving. This day's roots are intertwined with those of our Nation, and its history traces the American narrative.

Today, we recall President George Washington, who proclaimed our first national day of public thanksgiving to be observed "by acknowledging with grateful hearts the many and signal favors of Almighty God," and President Abraham Lincoln, who established our annual Thanksgiving Day to help mend a fractured Nation in the midst of civil war. We also recognize the contributions of Native Americans, who helped the early colonists survive their first harsh winter and continue to strengthen
our Nation. From our earliest days of independence, and in times of tragedy and
triumph, Americans have come together to celebrate Thanksgiving.

As Americans, we hail from every part of the world. While we observe traditions from every culture, Thanksgiving Day is a unique national tradition we all share. Its spirit binds us together as one people, each of us thankful for our common blessings.

As we gather once again among loved ones, let us also reach out to our neighbors and fellow citizens in need of a helping hand. This is a time for us to renew our bonds with one another, and we can fulfill that commitment by serving our communities and our Nation throughout the year. In doing so, we pay tribute to our country's men and women in uniform who set an example of service that inspires us all. Let us be guided by the legacy of those who have fought for the freedoms for which we give thanks, and be worthy heirs to the noble tradition of goodwill shown on this day.

NOW, THEREFORE, I, BARACK OBAMA, President of the United States of America, by virtue of the authority vested in me by the Constitution and the laws of the United States, do hereby proclaim Thursday, November 26, 2009, as a National Day of Thanksgiving. I encourage all the people of the United States to come together, whether in our homes, places of worship, community centers, or any place where family, friends and neighbors may gather, with gratitude for all we have received in the past year; to express appreciation to those whose lives enrich our own; and to share our bounty with others.

IN WITNESS WHEREOF, I have hereunto set my hand this twentieth day of November, in the year of our Lord two thousand nine, and of the Independence of the United States of America the two hundred and thirty-fourth.

Washington begins the first US Thanksgiving Proclamation by stating that "it is the duty of all nations to acknowledge the providence of Almighty God," but Obama the Christian-Muslim-Hindu-Sikh poser will have none of that. Obama, whose "natural-born citizen" status is still in doubt, would apparently prefer that we offer acts of public service rather than acknowledge gratitude to Almighty God.

The text of President Washington's message, which actually encourages US citizens to express thanksgiving to God, appears here:

General Thanksgiving
By the PRESIDENT of the United States Of America
A PROCLAMATION
WHEREAS it is the duty of all nations to acknowledge the providence of Almighty God, to obey His will, to be grateful for His benefits, and humbly to implore His protection and favour; and Whereas both Houses of Congress have, by their joint committee, requested me "to recommend to the people of the United States a DAY OF PUBLICK THANSGIVING and PRAYER, to be observed by acknowledging with grateful hearts the many and signal favors of Almighty God, especially by affording them an opportunity peaceably to establish a form of government for their safety and happiness:"

NOW THEREFORE, I do recommend and affign THURSDAY, the TWENTY-SIXTH DAY of NOVEMBER next, to be devoted by the people of these States to the service of that great and glorious Being who is the beneficent author of all the good that was, that is, or that will be; that we may then all unite in rendering unto Him our sincere and humble thanksfor His kind care and protection of the people of this country previous to their becoming a nation; for the signal and manifold mercies and the favorable interpofitions of His providence in the course and conclusion of the late war; for the great degree of tranquility, union, and plenty which we have since enjoyed; for the peaceable and rational manner in which we have been enable to establish Constitutions of government for our safety and happiness, and particularly the national one now lately instituted; for the civil and religious liberty with which we are blessed, and the means we have of acquiring and diffusing useful knowledge; and, in general, for all the great and various favours which He has been pleased to
confer upon us.

And also, that we may then unite in most humbly offering our prayers and supplications to the great Lord and Ruler of Nations and beseech Him to pardon our national and other transgressions; to enable us all, whether in publick or private stations, to perform our several and relative duties properly and punctually; to render our National Government a blessing to all the people by constantly being a Government of wise, just, and constitutional laws, discreetly and faithfully executed and obeyed; to protect and guide all sovereigns and nations (especially such as have shewn kindness unto us); and to bless them with good governments, peace, and concord; to promote the knowledge and practice of true religion and virtue, and the increase of science among them and us; and, generally to grant unto all mankind such a degree of temporal prosperity as he alone knows to be best.
GIVEN under my hand, at the city of New-York, the third day of October, in the year of our Lord, one thousand seven hundred and eighty-nine.