Is Obama smarter than a sixth grader? 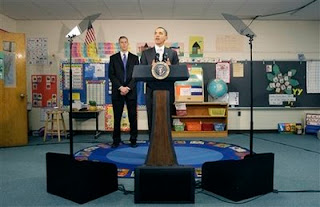 Obama's famous obsession with his teleprompter continued as he made remarks in the classroom. Why would Obama fear speaking off-the-cuff in a setting like this? He may have been concerned that wandering from the carefully prepared script might lead people to conclude that he is not smarter than a sixth grader.
Posted by Resist Tyranny at 4:50 PM