Wilson to Obama: 'You LIE!' 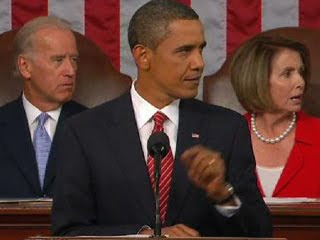 President Barack Obama delivered a 47-minute speech to a joint session of the US Congress about socialized medicine on September 9, 2009. In an environmentaly-friendly move, most of Obama's remarks were recycled from over 100 previous healthcare-related speeches and press conferences he has given since January 2009.
Unfortunately for the President, Rep. Joe Wilson (R-SC) shouted, "You LIE!" in response to Obama's false assertion that the proposed national healthcare plan will not cover illegal aliens.
And Wilson certainly got the attention of leading socialists in the room. This photo captures the moment when Wilson spoke aloud what millions of citizens were thinking. And the people pictured (Vice President Joe Biden, President Barack Obama and Speaker of the House Nacy Pelosi) do not look happy.
Posted by Resist Tyranny at 10:43 PM